Fintech company Upstart Holdings recently posted an earnings report that the market embraced, sending the stock higher. Upstart’s been on a wild ride since its IPO in late 2020, trading between $42 and $401 per share over just the past 12 months.

The stock not sits at almost $150 per share, and investors are probably curious how much upside there is. Fear not, I will unravel the company’s phenomenal quarter and detail why Upstart could continue posting impressive numbers.

The company, which uses artificial intelligence to replace the FICO credit score used by lenders in credit decisions, recently reported results for 2021. The company had fourth-quarter revenue of $305 million, a whopping 252% year-over-year increase, and smashing analyst estimates by 16%. Upstart also is profitable; non-GAAP earnings-per-share came in at $0.89, beating estimates by $0.38. 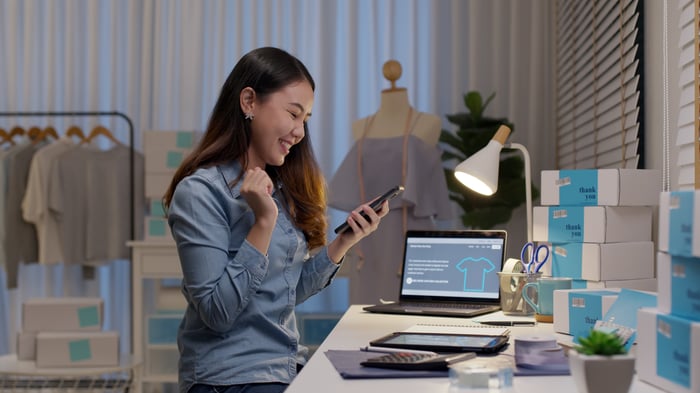 The headline numbers were great, but there’s more good news under the surface. Upstart’s net income for the quarter was $59 million, a 5,639% increase over 2020, evidence that revenue is already vastly outpacing expenses. The company’s cash on hand is now $1.19 billion, and management announced a $400 million stock buyback program.

It’s rare for a company growing as fast as Upstart to begin buying back shares; however, its profitability makes it possible. It’s not like Upstart doesn’t have any growth plans. Management is already expanding or will expand from personal loans into automotive, mortgage, and business loans. If Upstart can succeed in establishing itself in these new categories, the resulting growth could last for many years to come.

Personal lending is just getting started

The company partners with banks and credit unions, which originate the loans passing through Upstart’s credit decision platform. They pay Upstart a referral fee, which is how Upstart makes most of its money. Upstart’s network of partners had grown to 42 as of 2021 Q4, and seven of them have completely moved away from using the FICO score. This is a huge sign of trust in Upstart’s product, and it could persuade new lenders to partner with it.

A lender that works with Upstart and sees success will probably expand the platform’s use as Upstart gets into mortgages or business loans. Ten of Upstart’s existing bank partners have already signed up for lending through the automotive program that the company launched within the past year.

Upstart’s auto business could be a game changer

Upstart’s success to date has primarily been in the personal lending category. There’s so much opportunity in other loan categories, though, and it’s what investors should focus on over the long term. Upstart Auto, the company’s automotive retail software platform, is the first significant step in growing beyond personal lending.

If you’ve shopped for a car, you know that arranging the financing can be stressful, and it’s not always transparent to the consumer. Upstart Auto went live in 2021 after the company acquired Prodigy and married its AI with Prodigy’s retail software. It gives automotive dealers a digital sales tool that can instantly get lending decisions from Upstart instead of going back and forth with different banks.

Automotive dealers seem to be embracing the product; dealerships using Upstart Auto grew from 111 in 2020 Q4 to 410 a year later. Management is forecasting $1.5 billion in automotive lending volume in 2022, just over 10% of Upstart’s 2021 total loan volume. In other words, it should be a significant contributor to Upstart’s business in 2022 and beyond.

Management estimates the auto lending market at $727 billion, or seven times Upstart’s existing personal loans opportunity. Upstart’s ability to gain traction in the auto industry could play a notable role in the company’s growth over the years to come.

Lending is a huge market that gives Upstart a ton of potential room to grow. Management has signaled intentions to venture into mortgage and business lending as well, markets that management estimates are worth $4.6 trillion and $644 billion, respectively.

Upstart’s stock has declined from a high of $401 per share down to about $150, and the company still has a market cap of less than $13 billion. Upstart’s 2021 revenue was $849 million with just a few dozen lending partners and 12% of the personal loans market.

Upstart needs to continue executing over the years ahead, but the opportunity is there for it to one day have hundreds of partners, originating many billions of dollars in loans. The company’s strong quarter indicates that things are on the right track so far.

view all posts by hitesh nikam

As the fintech landscape continues to evolve rapidly, a number of emerging trends are likely to shape the future of the industry in 2023. From

The payments industry was once dominated by a handful of giants, but now sees near-constant market entry by fintech companies, each offering disruptive thinking and

Ongoing economic uncertainty and inflated valuations are having a dramatic impact on the fintech funding cycle. Last year’s numbers paint a bleak picture – according